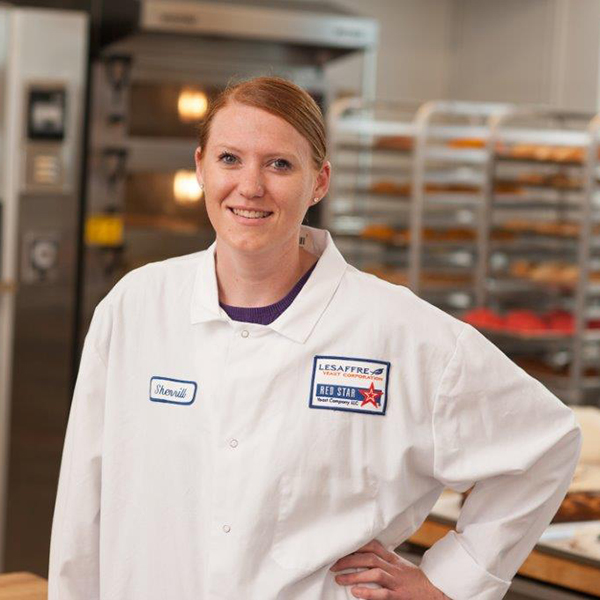 What made you want to begin a career working in the bakery industry?

Initially, I hadn’t planned on a career in the baking industry, I sort of fell into it. Originally, my background was in food science where I studied ingredients in dairy products for my Master’s degree. It wasn’t until I spent time working as a food technologist at a baking company that gave me my first exposure to the baking world. After that experience, I decided to pursue a Ph.D. in Grain Science with an emphasis in Cereal Chemistry. While at Kansas State University I had the opportunity to learn from and teach the students in the Baking Science program and as they say, “the rest is history.”

What challenges did you face starting out in your career?

One of the biggest challenges I faced was transitioning from academia into industry and understanding how the expectations between education and a large corporation differed. My current job is a newly created position so I had to learn what exactly I was supposed to be doing and how to fit into the company culture.

What challenges have you faced as a woman in the bakery industry and how did you overcome them?

The biggest challenge that I have faced so far in the industry is having to prove myself and show that I am capable of doing the work and accomplishing the task. I think this also stems from being a rookie on the job as well as being a woman in the industry. I believe that I was able to overcome this challenge by working hard, being prepared, and knowing who and when to ask questions.

How long have you worked in the bakery industry?

I have been working in the baking industry for 3 years.

What is your career highlight?

Last year, I had the opportunity to join my Lesaffre colleagues for an American Bakers Association (ABA) event where we lobbied on Capitol Hill. Not only did I have the chance to meet members of the U.S. Congress, but I also got to talk with current Presidents and CEO’s from some of the largest industrial bakeries.

If you could make one change to the bakery industry, what would that be and why?

One of the changes that I would make to the baking industry would be to have more mentoring for the next generation joining the industry. The older generations have a great deal of knowledge and experience that I know the young talent entering the work force could definitely benefit from.

What does your job entail?

As the New Product Development Lab Manager for Lesaffre Yeast Corporation, I develop and conduct testing on new and current dough improvers for foodservice, small retail, and industrial wholesale bakeries. I also conduct testing on our varieties of yeast and I get to play with some really cool equipment used for testing and evaluating dough and bread.

What advice would you give to young people looking to get into the bakery industry?

I would encourage students who are thinking about getting a degree in food or bakery science to complete as many internships as they can throughout their academic career. This will enable them to enhance their knowledge of the food industry and give them a better insight into their potential career path.

For those individuals who are just starting out in the industry, find a mentor, find someone who they can ask questions and will show them the ropes of the business. They will be their best ally as they get started in their career.

What are your hobbies and interests?

For my hobbies, I really like going for 6 to 8 mile walks, taking spinning class, reading, and traveling to visit my friends and former students that I taught during my time as a TA at KSU.

Who is your role model and why?

This is a complicated question for me, as I have had many role models and teachers throughout my life who have helped me to get to where I am today. But from the standpoint of a role model in the baking industry, I would have to say that it would be Dave Krishock, former BNEF Bakery Science Instructor at KSU. He has been a great teacher, mentor, and friend to me and has helped to guide me during my time as a graduate student and as I have started my career. His passion for teaching and learning and his enthusiasm for baking is something that can’t be emulated. I hope one day I’ll be able to teach and mentor the next generation of young professionals coming into the food industry in the same caring way that he has shown me.

If you could invite anyone to a dinner party, who would it be and why?

If I could invite anyone, I would most likely invite Harriet Tubman to a dinner party. I would love to know how she found the courage and strength to journey back and forth to lead slaves to freedom through the Underground Railroad.

If you could switch places with one other person, who would it be and why?

I would probably switch places with one of the tour guides from Rick Steve’s European tours. I think it would be fun to get to travel all over Europe and get paid for it.

What is your favourite bakery event and why?

My favorite bakery event would be attending the American Society of Baking (ASB). I really like this show because it’s held in Chicago, even though it’s cold, and because I get to catch up with a lot of friends and colleagues in the baking industry.

If you could choose to only eat one bakery product for the rest of your life, what would it be?

If I could only eat one bakery product, it would probably be a toss-up between a true French croissant or toast.

If you could tell your younger self one thing you have learnt from your career, what would it be?

How would you define success?

My definition of success would be when I have finally achieved the goal that I had set for myself, no matter how large or small.

What would you say has been your proudest moment in your career?

Thus far, my proudest moment in my career was having an ingredient that took me almost two years to develop for an industrial bakery successfully work when tested during a production scale-up.

What was your big break, and how did you reach it?

I believe it’s still really early in my career for me to say I have had a “big break,” but I think one of the best decision that I made was leaving my first bakery job to pursue a Ph.D. This has helped me to narrow in on my passions and let me realize how much I enjoy working with and developing ingredients for the industry.